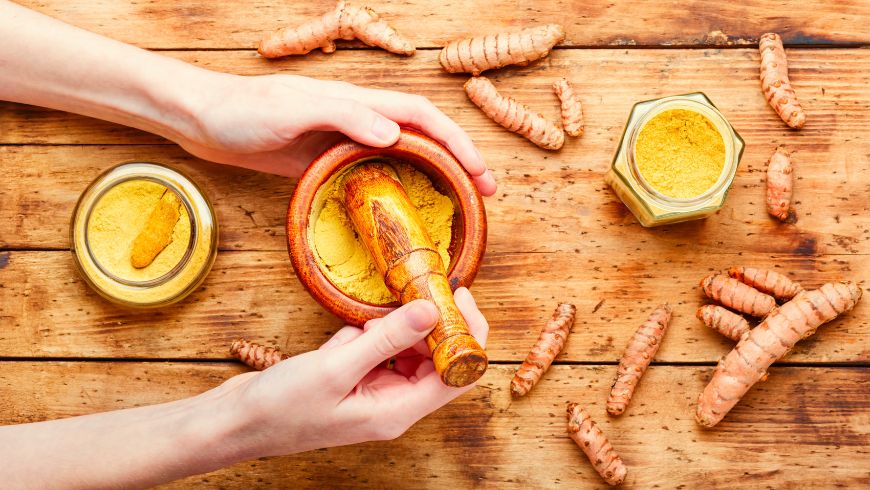 What exactly is Turmeric powder? From a botanical point of view, Turmeric is a rhizomatous perennial herbaceous plant of the Zingiberaceae (ginger) family. We aren’t all botanists, so let’s look at it in layman’s terms.

Turmeric is a plant native to Southeast Asia and is related to the ginger family. To produce the earthy dull orange-red powder you’re probably familiar with, a part of the plant is boiled before it is dried in a hot oven. After drying, it is ground into fine powder. It can then be used as a cooking ingredient (spice) in herbal remedies, topical skin treatments, and much more.

WHERE DOES TURMERIC COME FROM?

Turmeric has been used in most of Asia and the Middle East for thousands of years and is most famously the main ingredient in many curries. It is now a well-known alternative treatment option for a wide range of ailments and conditions, as well as used as a food supplement to boost the immune system naturally. The significance of Turmeric in various cultures for centuries is now coming to light. It has been proven through numerous studies and contemporary research that have examined the benefits of Turmeric and the active role of Curcumin – one of the major components found in Turmeric.

THE ADVANTAGES OF BUYING RAW TURMERIC

In addition to having a fantastic flavour, Turmeric offers numerous health advantages. One of the most notable is its potent anti-inflammatory and antioxidant function, making it an effective agent in combating various health issues. The main component of Turmeric is Curcumin; however, Turmeric on its own has poor bioavailability. The Earth Signature formulation blend tackled the problem with a mix of pure Turmeric powder and other ingredients to help activate the Curcumin in the powder. They also help in absorption so that your body can absorb enough Curcumin to reap the benefits.

While Curcumin is an ingredient found in Turmeric, it can be unclear when you come across products that advertise both. Curcumin is present naturally in Turmeric, so what does a Curcumin supplement proposes to offer? Which one has more health benefits, Turmeric or Curcumin? First, it’s crucial to know the distinction between the two. Turmeric powder is made by boiling, drying, and crushing the plant root. The result is an orange-red powder that contains Curcumin and other components naturally found in Turmeric. More than 100 components have been isolated from Turmeric. The main element of the root is a volatile oil containing turmerone, and there are other coloring agents called curcuminoids in Turmeric. Curcuminoids consist of curcumin demethoxycurcumin, 5’-methoxycurcumin, and dihydro curcumin, which are found to be natural antioxidants. Since Curcumin is considered to be the ingredient that is considered to be most beneficial, Curcumin supplements manufacturers seek to concentrate and isolate Curcumin exclusively, not focusing on other beneficial components naturally present in Turmeric.

Why are we not using Curcumin extract? We at Earth Signature use Turmeric and not Isolated Curcumin. It is a common practice that strong chemicals are used to extract/ isolate the Curcumin. The usual solvents for Curcumin extraction are ethanol, ethyl acetate, acetone, hexane, isopropyl alcohol, dichloromethane, and dichloroethane, among others.

Curcumin is a part of the group consisting of Curcuminoids, the most active ingredient in Turmeric. It has Anti-inflammatory, Antioxidant, Antimicrobial, Chemosensitizing, and Immunomodulatory properties. It may have positive interactions with cells on a molecular level. Besides its many benefits, Curcumin can be concentrated into its supplement due to its bioavailability – which refers to how much of a substance is available to the body to trigger a pharmacological effect. Turmeric powder by itself has poor bioavailability, whereas certain Curcumin supplements are highly bioavailable. Instead of isolating Curcumin from Turmeric, the absorption can be dramatically increased by adding another ingredient. Black pepper is one of the most well-known activators found in Earth Signature Turmeric blend alongside other essential herbs and spices. Piperine (an alkaloid) found in Black Pepper increases the bioavailability of Turmeric manifold, which makes Turmeric one of the most effective methods to consume it.

Fresh Turmeric Rhizomes are the plant’s roots before they are ground into powder. They look like ginger and have a distinct flavour that can be used in sautés and smoothies. Raw Turmeric can be used by cutting into cubes or circles, grated or juiced to make a smoothie. Fresh Turmeric is readily available at most supermarkets and in Indian and Asian grocery stores. The Turmeric powder production process involves peeling, boiling, and drying the roots (known as Rhizomes) before grinding them into a powder. Although the end product may lose slight freshness and zest in this process, the resulting powder is vibrant and more versatile to use. Natural Turmeric powders such as Earth Signature can be easily used in salads, curries, sauces, and dressings and even sprinkled or mixed with juices, smoothies, etc. It is also easy to store for a long time, thus making it a more popular choice.

Turmeric is one of the main ingredients in curries. Does this mean Curry powder is the same as Turmeric powder? What are the distinctions? Which is the better choice? We all know that Turmeric is a plant that can be ground into powder and then incorporated with other ingredients to create an efficacious health supplement. We also recognize that it has been used in curries for thousands of years. Today, cooks typically use curry powder to make different varieties of curries. In simple terms, curry powder is usually a blend of spices, typically but not always including Turmeric. The four main ingredients of a Curry Powder are – Turmeric, Chilli, Coriander, and Cumin, which can range from mild to extremely spicy. Although those Curry Powders that contain Turmeric have some positive health effects, they differ in mineral and vitamin content.

One of the most significant similarities between Turmeric powder and Curry powder (those containing Turmeric) is that they both have Curcumin. Besides adding flavour and colour to curries and other dishes, both powders are notable for their antioxidant and anti-inflammatory properties along with numerous other benefits related to digestion and brain function, prevention of diseases, etc. The main difference is the iron content; a tablespoon of Turmeric powder has approximately 5.2mg of iron, while a cup of curry powder has only 1.2mg. A healthy intake of iron assists in the flow of oxygen through the bloodstream, which boosts immune function and stimulates the regeneration of cells. Turmeric also tops the list regarding manganese levels, providing 1.9mg per tablespoon, compared to the 0.52mg contained in one tablespoon of curry powder. Manganese aids in healing wounds faster and helps the body in its efforts to fight ailments.  Turmeric is also a good source of the Omega-3 fatty acid and α-linolenic acid (2.5%).